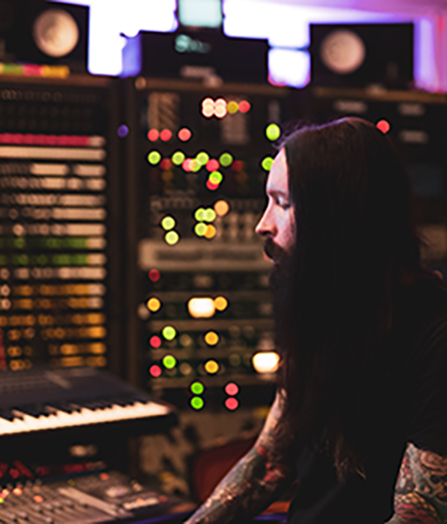 Alan started Electric Zu Entertainment as a way to help others develop their craft and experience life through music. Many things led to this but it was love & persistence that sent him all over the world, which has put him in a position to help others.

“I think life is amazing being able to do what you love & I’m grateful to be in that position! Whatever you choose to do, DO IT BECAUSE YOU LOVE IT. If you put the time into it..IT WILL HAPPEN!“

“The world would be a very different
place without music”.
“Alan Damien”

Alan has been in signed music groups that have toured all over the world.
Rolling Stone Magazine said his music is
“A GUARANTEED MEGA HIT ” And
“THE BEST THING TO HAPPEN IN 10 YEARS ”He is proudly endorsed by Ernie Ball Strings, Music Man Guitars, Mesa Boogie Amplifiers & Walrus Audio. His music featured in Rolling Stone 8x, Classic Rock, Guitar Player Kerrang, Revolver, Playboy, Total Tattoo & 100’s of others. Several songs he’s written or co-written have been played in daily rotation worldwide on radio. He’s had 4 songs that charted on “Billboard”, Music Videos on MTV in Europe, South America & Asia. He has several songs in Warner Chappell’s, Sony, Universal & Emi’s Catalog and has written music for Films on Netflix, Amazon Prime etc.